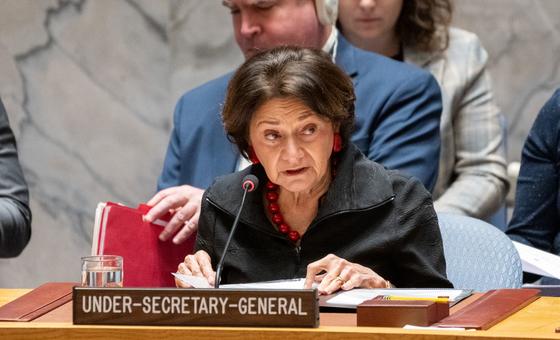 Ms. DiCarlo referred to the latest wave of Russian missile and drone strikes in Ukraine which, she said, terrorized the citizens of several cities (Kyiv, Odesa, Lviv, Mykolaiv, Kharkiv, and Zaporizhzhia).

With winter approaching, the attacks, she said, “renew fears that this winter will be catastrophic for millions of Ukrainians, who face the prospect of months of frigid weather with no heating, electricity, water, or other basic utilities”.

The UN peacebuilding chief went on to catalogue some of the reported consequences of the most recent strikes, from the death of a new-born baby in a maternity hospital in the Zaporizhzhia region, which was hit overnight, to dozens of civilian deaths in residential buildings in Kyiv and nearby towns.

According to Ukrainian officials and media reports, the country’s energy supply has been decimated; even before the latest barrage, practically no large thermal or hydroelectric power plants were left intact. All regions of Ukraine have introduced emergency shutdowns, and several regions are reported to be completely disconnected from electricity. Neighbouring Moldova has also been adversely affected.

Humanitarian efforts to support the Ukrainian people have ramped up, said Ms. DiCarlo: more than 430,000 people have received some sort of direct winter assistance in the past weeks, and nearly 400 generators have been distributed to ensure energy in hospitals, schools, and other critical facilities.

“The United Nations strongly condemns these attacks and demands that the Russian Federation immediately cease these actions,” declared Ms. DiCarlo, calling for accountability for any violations of the laws of war, and reiterating that attacks targeting civilians and civilian infrastructure are prohibited under international humanitarian law.

Despite reported shelling at the plant over the weekend, key equipment at the site remains intact, she said, and there are no immediate nuclear safety or security concerns.

However, she went on, “this is the result of sheer luck. We do not know how long this luck will last. The world cannot afford a nuclear catastrophe”.

The Under-Secretary-General briefed the Council that, a matter of hours before her address, the International Atomic Energy Agency (IAEA) had reported that the plant is relying on diesel generators to power cooling and essential nuclear safety functions.

Ms. Di Carlo was able to point to one ray of light in an otherwise downbeat assessment of the situation – a prisoner exchange.

Russia and Ukraine, she said, had reported the release of 35 Russian and 36 Ukrainian prisoners. She called on both parties to continue such releases, and to ensure that they fulfil their obligations under international law, in particular, the Third Geneva Convention, which relates to the treatment of prisoners of war.

All Member States and international organizations, said Ms. DiCarlo, must support efforts to prevent a man-made humanitarian catastrophe in Ukraine this winter.

“The resulting shocks”, she concluded, “would exact a heavy price, not only on Ukrainians, but on us all.